Red Tails A formula for success.

Go see this movie! Red Tails is a fictionalized account of the difficulties and heroic achievements of the Tuskegee Airmen! The movie starts in 1944 with America embroiled in World War II in the Pacific and European Theaters. The focus of the story takes place at Ramitelli Airbase in Italy, home of the 332nd Fighter Group, and follows the lives of a small group of young, but experienced pilots, with support from the ground crews whose job it is to keep the aircrafts flying.

There has been a lot of criticism made of George Lucas and his so called Hollywood formula predictive screenplay. Let me say this about formulas. A formula is a mathematical expression designed to produce the right answer. E=mc2 is a formula and its answer unlocked the secret of the atom and produced the most destructive weapon ever created by man. If someone tries to discourage you from seeing this movie and their argument is that some type of formula was used to develop the screenplay; just say "So what!" and go see it for yourself. Even though I was invited to the premiere in Los Angeles, I went to see the movie on its opening weekend, paid full price for my ticket, and I was glad I did. When you do go to see "Red Tails," take your kids with you. The characters in this film are not perfect, they have flaws, but the handicaps that they were able to overcome, in themselves and in the racist minds of society during that time... well, that's the stuff heroes are made of! “COURAGE HAS NO COLOR!” "Red Tails" is in theaters now, and is rated PG-13. 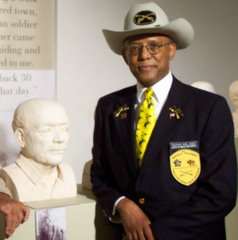 Trooper Jones
Los Angeles, CA, United States
I am a Vietnam veteran, served in the US Navy for just about 12 years, trained as a Nuclear Technician and served onboard three Nuclear Submarines. My father, Trooper Frederick Douglass Jones, was a WWII veteran and a member of the US Army mounted cavalry regiments known as the Buffalo Solders.